Beaverfolk assumes that everybody is out to get them.  As a result, they employ numerous defenses to protect themselves.

While they use wood extensively, they also like concrete and metal to reinforce their locations when possible.  Metal supports and beams are vulnerable to rusting and thus might be the weakest part of their security when near water.   Concrete structures require strong foundations and underwater
concrete can be a bit hard to work with and used sparingly, even for the industrious Beaverfolk.

Like their brethren, they usually set up their base of operations in the middle a lake of their own creation.  Besides acting as an effective cover, it allows a place to grow edible water plants and creates an artificial ecosystem.

The pond lies in the middle of the river, cutting off its flow with a dam on each end.  It is covered with free-floating plants, like common bladderwort, to provide portable cover and rotting stands of trees lie below the surface where the pond has overtaken the land.   At its deepest, the pond is 40 feet, with the depth being 20 feet midway from shore.  The pond covers a large area, constituting most of the game/battlefield.  The shoreline around the pond is muskeg leading to muddy scrub and finally into a thick forest which the Beaverfolk cultivate for their primary building material.
The area is protected by traps and other barriers that will limit larger opponents to "cut them down to size."  Trapped zones are dangerous to the young and inexperienced Beaverfolk, so open lanes through them exist and marked by Beaverfolk communications like specially marked trees.

Common Weapons used by the Beaverfolk: depth charges, speargun, trident, torpedo LAW (around the pond).  There is usually a sniper in the watchtowers.  Underwater weapons can be found in the Drev Book of Adventure.   These assume Beaverfolk that have raided or traded with communities with higher-end technology. Without such trade, tridents and spears are their favored weapons, with frequent use of nets.

Overall this should be adaptable to any CR, with some recommended challenges and setups.

1.      The Traplines.
Represented by: The Bear Trap Symbol
Located along with the lodge and just outside the palisades are the traplines used to help deviate enemies.  Most are non-fatal.  There is a set route through the traps that the community members know about.

Mini-Montage:  Finding a way through the Trap Line.   CR:  Typically 1 to 3; low enough for locals to make their way through the area.  Complexity:  based on party-sized; might be modified by terrain if the party has few or no safe way to travel in the water and the surrounding muskeg.  Primary Skills:  Battlecraft, Knowledge (Nature).   Secondary Skills:   Survival.  Spells:  spells that assist in vision or understanding languages may help see the path or interpret the Beaverfolk natural signs of where to find the route.   Success:  Avoid the traps in the area.  Failure:  End up in the middle of the trap line.  The GM may target the party with trap appropriate for their CR.  The GM may split the CR evenly into a number of different traps, usually with 2 or 3 being the maximum encountered.

2.      Residential Huts.
Represented by: The Town/Rounded House Symbol
Outside the palisades are a number of residential huts for day to day living.  They are made out of wood and enter through small unbarred doors.  Inside there is not much to find, though exploring with a searching montage may grant the players a Mcguffin (like a map or instructions) to help navigate through or dealing with the trap lines; typically a +2 bonus to either situation.

3.      Meeting Lodge.
Represented by: Fort Symbol
Located outside the palisades, this is a meeting place for outsiders and is one of the only areas with a human-sized doorway.  It has a concrete foundation and made out of logs, reeds and other materials.  Usually, there are 2 guards at the entrance to take names and report visitors.   There is an opportunity for a social skill montage with an administrator to gain entrance to the compound.  This is normally +2 CR higher than the party or what the GM feels is appropriate.
4.      Watch Tree.
Represented by: Tower Symbol
In place of standard watchtowers are platforms built on thick trees close to the lake. Narrow stairs to go up to the platform with a pole (fireman style) so they can drop quickly into the ground to warn others or escape.  Each one is occupied by one spotter and one sniper.   Spotting the watch trees is a little difficult, and may require a skill check to do so (DC 15 is appropriate).  In-game terms, treat as Fence, wooden with sniper walls.

5.      Wooden Palisade.
Represented by: Brown lines
This wooden fence surrounds their lake to block the line of sight and to provide cover. There are spaces so Beaverfolk can shoot between the wooden beams and for water to flow.  The palisades stand about 6 feet above the waterline and have rudimentary alarms (bells) that go off if one tries to scale them.  In-Game terms, treat it like a wooden fence for purposes of cover.

6.      Geese Pens.
Represent by: Clan Moot/ Standard House.
Along the inside of the wooden palisade just before the deepwater begins is an enclosed fence where geese are raised. Geese are relatively cheap to raise and are used for their down and trade items.  They make a surprising amount of noise when they notice creatures they are not familiar with it.  The GM may use appropriate CR Bird in this role; higher CR means the geese can be reskinned as mutated guard animals.  If you need a default, just use the Alarm Trap in the Drev Player’s guide but using handle animals instead of sabotage.

7.      River Gates.
Represented by: Brown lines across the river
On each of the ponds is a complex water gate that is used to stop and control the flow of the river.  These are used to maintain the depth of the pond while still allowing some flow of the river.  These are quite complex to operate and are well protected and monitored.   They are made of concrete with some wooden components.  They are usually guarded by 2 mooks (bandito) at each end.

8.      Underwater Gardens.
Represented by: Kelp Forest Symbol
Various plants are raised for consumption for both the beaverfolk and their geese, such as bulrush, bushy pondweed, Canada hornwort, and clasping leaf common cattail.

9.      The Lodge Bunker.
Represented by: The Island in the middle of the Lake.
This round cement building rises above the waterline, with the vast majority of it being just under the surface.   It has size small exits that can only be accessed from underwater.  The entrances have lockable hatches to further enhance security.

Besides the obvious dungeon delve/lair aspect of the Beaverfolk compound, there are a number of reasons or plot hooks to make use of it:
·         There is an ooze in the area that has been consuming passerbys.  The Beaverfolk has decided to hire the adventuring party to deal with it.
·         The Beaverfolk have kidnapped a couple of fey that invaded their territory, and the local Bogey/Elf/Feylin/Gnomes have gone on the warpath.  The party will need to return them to defuse the situation.


·         The party is on the run from a big dangerous encounter from a powerful entity and the Beaverfolk have grudgingly offered sanctuary.  In return, they are expected to pull their weight in the oncoming siege. 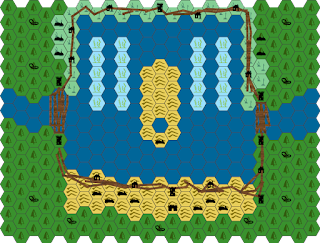 Posted by drevrpg@gmail.com at 6:14 AM No comments: