Delaying the end of psychic month for one week while I get the final post prepped, so here's some filler:

The following are some fun rules that came up during game play that we found fun.


If somebody in your party makes a secret knowledge check on an opponent, it allows the party to be able to do critical hits on opponents that normally would be immune (ex. Construct, Undead).  This promotes team work and reduces talent waste (because honestly, if you sink a series of talents to improve your critical, this allows them to be used).


Note: This rule was inspired by the 1st edition dnd rules and the Spoony Experiment for reminding me about it.
http://spoonyexperiment.com/counter-monkey/counter-monkey-an-entirely-miscible-episode/

It is possible to mix magic potions.  However, by doing so it increases the chance of magical mishap.  Use a Use Magic Device that is based on the most powerful spell involved (DCs as per a standard ritual check based on page 88 Book of Magic).  If it succeeds, both spells work normally.  If it fails, or a 1 is rolled, roll on the spell mishap table (see page 97 from the Dark Revelations Book of Magic).  If a 20 is rolled, consult the ritual casting-expanded critical (See page 45 of the Dark Revelations Book of Adventure) for results.

#drevrpg #d20 #apocalypse #rules
Posted by drevrpg@gmail.com at 5:44 AM No comments:

More builds using the Book of arrogance….click here to download.

DPP Psychic Sweeper
Call it a gut feeling, but I think I found them.
Class/Path:  Psychic/Mentalist
Recommended Races:  Human only
Party Role:  You sweep rooms and know pretty much everything that needs to know before it happens.
Focus On:   Wis (Str 10, Dex 13, Con 14, Int 12, Wis 15, Cha 10)
Best Skills:  Perception, Sense Motive, Survival
Who Are You?  When they discovered your “talents”, you were immediately brought into the Psi-Guard military arm.  From your training, you became a Sweeper, a psychic trained to see the world around you.   You are also a surprisingly lucky shot. 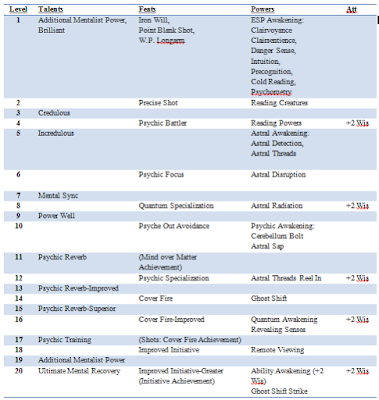 Snow Tabby
Chill out before I howl!
Class/Path:  Psychic/Eruptor
Recommended Races:  Cat
Party Role:  Ranged Attacker and close Ranged Fighter at higher levels.
Focus On:   Dexterity (Str 11, Dex 17, Con 14, Int 10, Wis 14, Cha 10);
Best Skills: Perception, Psycon, Stealth
Who Are You? Some find you cold, you prefer the term discriminating.  However, inside your small fury body is a ton of feline rage. 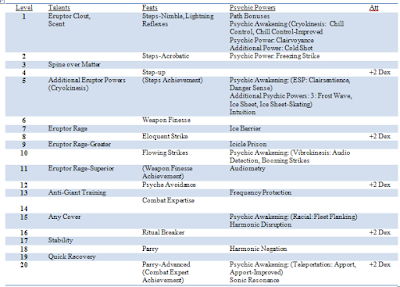 Two Axe Warrior
Mighty is the Axe and it’s next Cord will be your Epitaph!
Class/Path:  Psychic/Psycho-Warrior (Strength Psychic Key Ability)
Recommended Races:  Minotaur; requires the Growth talent tree
Party Role:  Front Line fighter and general axe enthusiast.
Focus On:   Strength (Str 17, Dex 13, Con 14, Int 10, Wis 10, Cha 12); strength based psychic
Best Skills: Athletics, Manipulation, Performance
Who Are You? You have two axes: One for playing and one for fighting.  Your Intense Harmony with the music allows you to push yourself in ways that mere mortals can only dream of.  That glistening on your hide just happens to be corrosive. 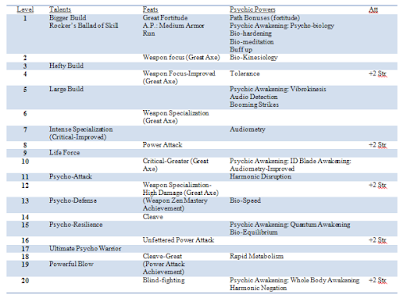 #drevrpg #d20 #apocalypse #psychic #builds
Posted by drevrpg@gmail.com at 4:29 AM No comments:

Dark Revelations - The Role Playing Game - Book of Arrogance is out

#drevrpg #d20 #apocalypse #psychic
Posted by drevrpg@gmail.com at 4:35 AM No comments:

Battle of the Bands


More than any other event that defines Ed town is how bands clash in a bizarre combination of song and fury.

Battle of the Band Skill Montage

Attacking the crowd is bad form and gives a -4 morale penalty to any future rolls, including the combat afterwards.

Battle of the Band Equipment

Battle Stage
Costs: 4000 GB
Effect: This location adds a wire screen to the stage that adds cover to the band.
Special: Can be put on a vehicle that is size huge or larger.  The vehicle can no longer use a weapon arm (see book of progress) or turret.

Launchable Speakers
Costs: 5000 GB
Effect:  This fires speakers on the fly allowing for battle of the bands to happen in places other than stages.

Psychic Amplifiers
Costs: 1000 x the maximum bonus it can give in GB.  For example a psychic amplifer that can give up to a +4 (maximum 1 psychic point) costs 4000 GB
Effects: Because of the inherently psychic quality of music, Psychic Amplifiers are often put onto stage to enhance the performance.
Such a device gives: a base +2 to any Skill perform checks.  However, if a psychic point is put into it, it adds an additional +2 per psychic point spent.  A maximum of the character’s level divided by four can be added to the roll
Weight: 40 lbs.
Special:  It needs to be selected for whatever Psychic power will be used in the performance.  The following will give a some examples of what it will do:
·         Astral:  This psychic amplifier gives the stage an ethereal feel as it distorts everything.
·         Cryokinesis:  An ice stage show occurs at the same time as long as the music plays.
·         Ectoplasmic Projection:  Ectoplasm morphs and projects and in some cases can act as subtitles so the audience can sing along.
·         Electrokinesis: electricity always provides a draw.
·         Empathy:  This enhances the love of the audience for the band.
·         ESP:  This is often used to point out “a very special someone” in the crowd.
·         Photokinesis:  This power allows the stage to be reshaped to fit the needs of the band.  It also makes for great laser light shows.
·         Telekinesis:  Band Members and equipment can float anywhere on stage.  It also can be used to seed the audience with “merchandise”
·         Telepathy:  This is good for causing the music to not only be heard, but projected into the minds of the audience.
·         Teleportation:  Ever see a music video where the band members appear out of nowhere.  This is how it is done.


·         Vibrokinesis:  Music is enhanced by the natural psychic powers to give it a distinctive feel.

#drevrpg #d20 #apocalypse #psychic #skills
Posted by drevrpg@gmail.com at 5:18 AM No comments:


This month the book of arrogance will be released on the 15th of July.  As a result, this month has been declared Psychic month.


Fly fast, burn hard and leave tons of chard corpses.
Class/Path:  Psychic/Eruptor
Recommended Races:  Dragon (affinity fire); requires the Dragon, and Flight Talent Trees
Party Role:  Flying Blaster
Focus On:   Dexterity (Str 10, Dex 17, Con 14, Int 12, Wis 13, Cha 10);
Best Skills:: Knowledge (Parapsychology), Perception, Stealth, Treat Injury
Who Are You? You look like the classic dragon of legend, or at least will in about a century. Right now, you are still growing into your wings.  Still, you love to fly and burn those that have earned your wrath.  However, your party has insisted that you carry a First Aid Kit in case you miss.


My Only Judgment on you is that you look Delicious.
Class/Path:  Psychic/Rocker
Recommended Races: Vampire
Party Role:  Illusionist, landscape control
Focus On:   Charisma (Str 10, Dex 14, Con 10, Int 12, Wis 13, Cha 17);
Best Skills: Bluff, Performance, Knowledge (Parapsychology), Stealth
Who Are You? You decided the works of 70’s Glam Rock is how you want to live your life and the rest of the world be damned, especially if you can be involved in the damning.  In spite of this, you’d be surprised how popular a vampire is that can control light is amongst their associates.  You like to choose to live in a world of your creation and most people come around for the ride as well.

Posted by drevrpg@gmail.com at 4:59 AM No comments:

Background
These small beaver human hybrids are common throughout North America.  While it is unknown whether they were a creation of pre revelations genetic engineering or magical breeding, what is known is that they are obsessed with building stuff and “don’t take too kindly to strangers.”

Society
Beaver Folk usually setup home steads besides bodies of water.  They are usually nuclear families, with a mated pair and children.  Because their diet is vegetarian, the usually chew on trees for sustenance.  They also setup “underwater gardens.”

When multiple families get together, they create a lodge that can also be described as compounds.  Often armed as best they can, and taking advantage of natural obstacles, they are incredibly defensive.

Beaver folk mark their territory with signs and scents to keep trespassers away.

Relations
Beaver Folk have trouble getting along with anybody, but can respect the work ethic of dwarves and often setup trade relationships with them.  Fey seem flighty, but will stay out of their business if it is reciprocated.  Desecrators and Living Dead are “unnatural” and it takes a lot to get them to trust either.  However, they have working relationships with Little Bears (because they are just so darn friendly).

While most Beaver Folk Shun the undead, there are evil Lodges that live trap on behalf of the Vampires.

Adventuring
While most Beaver Folk do not adventure, when they do it is for the money and glory.  They also have a tendency to get armed to the teeth and armored to the eyeballs.  They also almost always try to get a “sweet ride.”

Recommended Class/Path:  The preferred adventuring of choice for the Beaver folk is Adventurer/Troubleshooter.  They also make a mean Channeler/Faustian Mechanic.  Other common choices include Adventurer/Scout and Combatant/Soldier.

Personality
Beaver Folk have a Jekyll and Hyde personality.  To “outsiders” they are quiet, paranoid and very suspicious.  However, with friends, they are friendly to the point of nosey.

Description
They are a fluffy rodent man with a flattened tail.

They prefer paramilitary gear for attire and dress for maximum effect.

Ability Score Adjustments:   +2 Constitution; they are surprisingly tough for their size.

Size:  Small: +1 to attack and AC, -1 to CMB/CMD, +4 to Stealth skill, carry capacity is ¾ (x 0.75) that of normal medium creature. Weapons must be sized for a small creature (treat tiny weapons as light, small weapons as one-handed, medium weapons as two handed, cannot use large weapons).

Posted by drevrpg@gmail.com at 4:51 AM No comments: