Strathcan is the collective name of the various locations in western Canada.  Its comparative isolation has left it a place of wonder, but also of danger.

While cut with other alien regions, it still is an immense conifer forest that still stretches from what was Alaska to Quebec.   The trees are very flammable and often erupt in flames creating massive walls of pyrotechnic doom.  It also is permeated by more lakes and rivers then any other place on planet earth.  In the winter, it is dark, desolate and knee high in snow and you won’t see the new fauna coming.  Little Bears and Ungo are the most likely inhabitants of this region.

The mainstay of population and oddities are in the rolling hills central Alberta.  While technically only covering the southeast territory of Ed-town, it often is declared up to the foothills of the west to Lloydminster in the east.   It is known also as the Parkland, as it is heavily forested, swampy, and teaming with small hamlets and villages.

Cutting into the Boreal Expanse are a series of clear white crystals that are large as trees that radiate psychic energy and are spreading into new regions due to vibrations.  A lot of the biodiversity of this region are naturally psychic and often mess with the senses of those who are neither gifted nor prepared.

The Eastern side of the Rocky Mountains has been retaken by a older dragon known as Jargon.  Controlling the areas of Jasper and Banff, He rules from Wyrm’s lake, a renamed Lake Louise. These mountains were strange before the Hodgepocalypse, but Jargon’s experimentation has only made things stranger.

Bio organic mushrooms have ground around the village of Vilna and kept going into an alien lush forest.  It is a renewable resource of Iron, but has its own dangers, from its metal dust pollination to the Trollitariots, a monstrous fey species with a severe work ethic, that often live under it’s shade.

Where the foothills meet the prairies has created a massive lake where the flood plain once was.  This includes the former city of Calgary, redubbed Prairie Oasis, which the successors of the past have been resettled in a sort of western Venice.

The former Peace River territory has been heavily flooded, not by rivers, but by the vast compounds of Beaverfolk under religious degree.  It is a temperate, wet war zone for those not prepared for the obstacles.  Its name is somewhat ironic.

Acting as a southern border to the Strathcan area and encompassing southern Alberta and Saskatchewan, this area of dry steppe is also a place of magic, not unlike the Bermuda Triangle.  Objects, people can disappear without a trace, but if you need to cast a powerful ritual, this is the place to seek out.  The Cypress hills in the middle of Pallister’s Triangle are a focal point for spellcasting.

Grasslands cover the southern part of Alberta, Saskatchewan, and Manitoba.  It is the land of the Shuffalo, a creature best described loosely as a hybrid between an African Water Buffalo and an Elephant. These creatures not only can be startled to stampede, but they also have a natural ability to teleport short distances.  Other Fauna include Laser Gophers, Telehares, and herds of Terminator Hogs.

Around Fort MacMurray are a distinctive land.  Once the Alberta Oil Sands, now a gargantuan greasy pit filled with massive tar oozes.  Technically they are a renewable source of Petrochemicals if one is willing to risk the dangers.

The Hot Dry Badlands are recognized by its multi-hued canyons and wind-sculpted hoodoos.  It was one of the largest depositories of dinosaur bones on the planet. Now it is often plundered by Necromancers as a supply of unique dead.  It has renamed for its notorious Terrorsaurs.  Dinosaur-Demons from the hallowed world have seeped onto our earth with plans to rule it with primal fury.  They are enemy of life and civilization and want nothing less than a bringing of death and destruction.  They are a mere trickle so far, but it is only going to get worse from here.

Most of Northern Canada has been transformed drastically.  The Void Covenant, a massive insectoid army has a foothold on Hodgepocalypse.  What was once boreal forest in the far north is now a strange swampland filled with bright colors created from their consumption of local flora.  The Void Covenant massive geometric towers are made of mud and resin and descend into the depths of the earth, filling the underworld with tunnels and chasms.  They have been slowed more due to extreme temperatures then adventurer activities, but there will a time where they will either be dealt with or consume the entire continent. 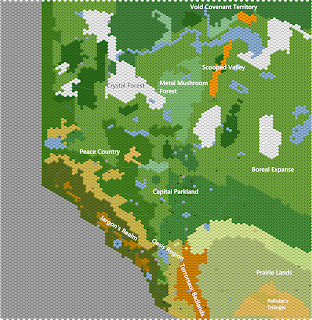 Posted by drevrpg@gmail.com at 3:27 PM