Surrounded by Mixed Forest, this isolated Commune is built on what was once Miquelon Provincial Park. Filled with murky lakes left behind by ancient glaciers, it almost looks completely uninhabited, if you don’t’ know where to look. It is when you look, deep into the earth that you finally realize how populated this site is.

This is the Commune of the Garter Folk. Believed to be a mutation of the humble garter folk given humanoid form, they have setup a life for themselves despite their reptilian nature.

For the playable species in the Hodgepocalypse, here is the following link.

What is particularly perplexing is they have picked an area that really is not particularly habitable to the species. They are cold blooded but live in area that as cold as minus 30 degrees Celsius.

So how do they survive?

The Garter Folk yearly cycle is planned on the assumption that winter is coming. They spend a sizable chunk of the year preparing to sleep during the worst of the weather. Afterall, why would go out in weather that is punitive to your species, baring being an aberrant adventurer. However, the world is a dangerous place.  There is a contingent of about 15% of the colony that takes shifts staying awake at all times.

While there are no volcanic features, an effortless way to reduce the harsh environment is to dig deep into the earth. The wind is blunted, the cold is insulated, and it can be done with a minimal of tools and knowledge of technology. The oldest parts of the community were built with this simple rule in mine.  The top is usually not unlike a sod house as the dwelling is reinforced by grown grass.

As soon as they discovered how it is possible to use glass and plastic to magnify the heat, there has been a redesign on how they live. In fact, the communal locations of slumber are often these artificial hot zones so they can enjoy the winter.

Because the Garter Folk are sluggish at best during this period, they compensate using technology. The Garter Folk have placed Cameras at choke points within the community and are often reinforced with computer targeted turrets. They also have the equivalent of baby monitors in the communal chambers connected to alarms if things go awry.

While Garter Folk are friendly and a giving people, the simple fact that in the winter being awoken from their slumber makes them agitated. Simply put, they are hungry as every calorie is expended. While they are not actively cannibalistic, an invader that is there to threaten their family will not be missed and their carcasses will be considered “suitable compensation.”

Thanks to the power of technology, Garter Folk do have proper attire for the great outdoors when it is harsh. Cold wear is a full body stocking that is electrically heated to provide proper heating. Covering their heads are an electrified toque and googles so not a single inch is exposed. This winter wear can be worn under armor to provide a layer of protection.

Despite their fondness for modern technology, Garter Folk feel a connection to the earth and world. Witches are quite common within the culture and as a result, often spellcasting is used when technology fails. Continual flame is good when the generator stops. Create Food and water is a wonderful way to make food from nothing in emergencies and that is just the tip of the iceberg.  Rainmakers are also incredibly common as when you need to blunt the weather, it is good to call in the experts.

With the winter being so harsh, spring is a breath of fresh air. Once it’s been sprung, Garter Folk are in the equivalent of spring break.  It is essentially party time for about a month and expect to see plenty of “snake balls.”  Shortly afterwards, the hatchery fills to capacity.

Miquelon is a shrinking lake, but it it has been mitigated by regular rainstorms created by Rainmakers. This is the dock where the Garter Folk go fishing during the summer months.

Along the edge of the lake is a sandy beach used for entertainment. This is further enhanced by mirrors to give that toasty feel that a cold-blooded creature can enjoy.

These dome structures are used for transporting supplies from the surface to the depths of the commune.  Has a receiving elevator for large objects.

This is the main entrance into the Garter Folk Underground Compound. It has security cameras and a radio for communicating with the outside world.

To get deep into the earth, you need to descend via the ramp. This is a tight fit with a heavy sloping ceiling.

This high traffic area where equipment is doffed acting as a real mudroom. It is also separated from the outside tunnels by a set of double doors.

To defend from interlopers, this area is separated by a small hallway where a fence guides the intruder to a place where the door slithered checks their credentials and disarms before they go further.  Usually, a couple of garter folk guards are there with submachine guns in case things go south.

While they prefer to use natural sources, they keep a wood burning furnace going during the coldest months. It blows balmy air throughout the complex during the winter.

If anything, really goes wrong, this is an electrical generator ready to be turned on in a moment’s notice. It is used for light and to guide Garter Folk to safety but can be used for survival for about a day.

This composed area contains the preferred meat of the Garter Folk: earthworms. They are grown in a dirt chamber where they are mixed with the waste of the community. It is isolated because it stinks.

This is where most of the population stays during the winter months and is where the Garter Folk go to have their communal meals.

This kitchen is damp and filled with dirt. It contains a wide variety of cooking equipment and is noteworthy for its large pots for cooking in bulk.

Garter Folk are ovoviviparous and thus carry their eggs to term. This is the medical room where they insure a healthy parent and child.

This has the feel of a one room school in the depths of the earth. A dozen garter folk and their younglings slither, learn and play here. Straw mattresses cover the floor as well as earthenware bowls and supplies on simple wooden tables are here as well.

This large communal closet is filled with hooks hanging gear to the ceiling.

This room is filled with incense and cushions. The floors are covered with a rubber raised floor layered with wood as it feels super comfortable.

While Witches mingle with the regular population, they do need some space to perform rituals in private.  This has several bookshelves with assorted variety of creatures in jars and other artifacts.

This location is raised to the surface and has a greenhouse roof. It is so that it can be exposed to the elements in a controlled manner. There are a series of wooden chairs setup in a circle with one big chair in the middle.

This bare flagged room is a sauna filled with hot rocks and indoor plumbing.  This is where about 15 Garter Folk at a time can steam themselves for heat retention.

The alcove has an industrial level washer and dryer as well as several lines for hanging up clothing for pressing.

This Room has a series of wooden benches and hanging tools for construction purposes.  It also has a gaming console at one end for entertainment during the dark months.

This room is deep inside the compound and is a series of monitors to check on entrances and to relay information to the observation tower.

This room is a green house built close to the surface and designed as a place for warming up between hibernation periods or when an emergency requires a Garter Folks’ full attention.

This is the backup emergency exit. The doors are setup with a rudimentary alarm if opened and are only openable from the inside.

This was originally an astronomy post created by the University of Alberta. It is now an observation station maintained by the Garter Folk to spy on their neighbors. It also has been redesigned to be connected to the underground lair. Finally, a turret has been added to allow for defense should observed targets become hostile. 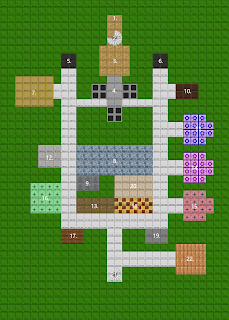 Posted by drevrpg@gmail.com at 2:29 PM