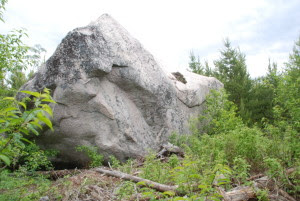 Note: inspired by the Christmas in Ignace song as done by the arrogant worms.
http://www.arrogantworms.com/albums/
(last song on Christmas Turkey – their Christmas album)

This giant rock was originally formed in ancient times as a product of the receding of the Lauretide ice sheet over 10,000 years ago.  These angular chunks of fractured granite stand out along the wasteland.   They were once known as the blueberry rocks and were a popular tourist trap that was relayed in song.  These were also used by the local inhabitants for bouldering (short climbs to learn how to climb)

However, once the Times of Revelations occurs, these rocks were pelted with mystical energy.  These rocks have developed a faint red and green glow that cycle over time that is what gives them their name of Festivus Rocks.  There doesn’t seem to be a pattern, but it gets more prominent during winter holidays.  They also have a number of festive holiday pictures that appear on its flat surface that will be animated by the Festivus Rocks if it feels threatened.

Place of Power: Minor; most of the magic is already channeled by the rocks themselves.
Special Usage: The caster gets +2 ritualist checks when it comes to cold and earth based spells.
Other Rules: You must be within 100 feet of the rocks and need to make a use magic device check to get the rocks to like you.  If a 1 is rolled, 1 or more art aberrations are animated and attack the target.

Additionally: Any damaging spells with the earth or cold properties gets an additional will save (based on spell level of the spell).  If it fails, it adds the condition of confusion to affected targets for 1 round.

Little black flies have blocked off this place of magic to the locals.  The local folks at Ignace are hiring the adventurers to free their beloved monument from these intruders.

Potential Twists:
·         The flies were summoned by a Tsi Tsi Master whom has taken issue with the bad customer service that they received while in Ignace.  The spellcaster is not unreasonable, but have lost their patience and the party will need to show the Tse Tse Master a good time if a fight is to be avoided.
·         They are not black flies, but bees.  The Bee People of Manitoba are making a hive in this location.  The have already sent out Road Bugs to connect it to their hive.
·         A community of Snake People has moved in to the area and has been using the massive amount of little black flies as a food source.   They have setup a series of “serpent holes” in between the Festivus Rocks.  They aren’t leaving unless they get something of equivalent in return.

#drevrpg #d20 #apocalypse #relicroadshow
Posted by drevrpg@gmail.com at 4:55 AM