Note: This race was inspired by a live showing of the “Irrelevant Show”, a Canadian comedy troupe.

Background
Marlarkoids claim they are a space fairing alien species that landed on earth before the revelations, sometime in the very early 21st century.   They took on human vestiges to walk among us for a short time before being forced to leave because of what is now only known as “interspecies difficulties” with some of their young ones, the rest of the details have been official redacted both by human and Marlarkoids officials at the time.  Despite this, they also claim they have visited earth occasionally over the decades leading up to the revelations, just to check up on the humans that interest them so much.  Due to much stricter protocols, often they only came close enough to pick up current music that was being transmitted from the planet.   On their last trip to earth, a tour company full of families found that their interdimensional drives on their vessel suddenly began to go haywire, sucking them towards Earth like singularity.  Before they knew it, they had crash landed in the middle of Armageddon.

One would think that learning aliens where in fact real would be a big deal for not just humans, but other species, but in reality this is not the case.  Many human scholars believe that the Marlarkoid story doesn’t hold up under inspection, and accuse them of being nothing more than mutations whose bodies and brains were scrambled by the revelations.  Other scholars have just simply shrugged off the alien story as being just another day in post-post-apocalypse.  In the case of the legendary wizard of the Rock, Waldorf the Groovy, he simply stated to one Marlarkoid visitor to his office, “welcome to the party.”

Society
According to their official history, an estimated fifteen Marlarkoid families and few dozen individuals survived the crash landing, with scattered life pods touching down all over the northern latitudes.  With no way of returning home in their one-way escape pods and human civilization collapsing like a house of cards during the revelations, they could do only one thing: Hide.   And up to recently, they remained hidden from a scary world the best they could.
Marlarkoids are communal by nature and the majority live in small nuclear families.  Since they live in small, scattered, population bubbles, older Marlarkoid are careful to try to protect younger ones, most of whom are second generation “earthers”.  However, this parental protection often leads to micromanagement of their children’s lives.  Naturally, younger Marlarkoid resent this backseat or “helicopter parenting” and go on the lamb quite frequently.   While problematic, this has lead Marlarkoid families hooking up to make slightly bigger communities.

The largest known population is in Regina, Saskatchewan. There they live in underground structures partially crafted from psychic crystal with the help of some local Stumpies and Harvesters.  Many Marlarkoids try to make a conscious effort to visit St. Paul, Alberta (See Relic Roadshow #3 – The St. Paul U.F.O. Landing Pad blog post for more detail), perhaps in the hopes of a rescue ship landing.   Harold offers them great discounts.   Other Marlarkloids have tried to find their way to New Mexico in the hopes of coming across Area 51, where some of their past human interactions have rumored to occur.  Many of these Marlarkoids never return or return with never coming close to their destination.

Relations
Being accused of being delusional mutations caused by the revelations, has soured relations between Marlarkoids and some human settlements, thus they tend to interact with more open minded folks or those who just don’t care.

Their love of all things human has slowly turned into love of all things Halflings and Feylins.  The former being kind, warm and open hearted to all.  The latter being curious fanboys and fangirls much like Marlarkoids themselves.

Otherwise, they try to hide their true form from most of the normal species, and often find solace in hanging out with the less humanoid species that accept their true nature.  Memories and horrible tales of observing the Necromantic Wars has made them apprehensive of Kamidavers, Vampires, and any other Living Dead.

Adventuring
Young Marlarkoids often adventure to get away from their somewhat clingy relatives.  Some have to one again to fall into the old Marlarkoid stable of being tourist, setting out to collect souvenirs and pictures of this new alien world, sometimes just to annoy the elders at home.   Elders sometimes set out in hopes of finding a way back to stars and to confirm their own history and memories are true.  However, the greatest drive is to find other Marlarkoids for the essential need to hook up and maintain the population.

Personality
The average Marlarkoid is curious, friendly and quite trusting once they get to know someone, usually starting life neutral good.  As they age they have a bit of a controlling streak that comes out, making them typically lean towards lawful in alignment.  While they usually mean well, they will give their opinion on just about anything with the idea it will always be receive cordially.  Otherwise they are, especially young ones, a bit naive and sometimes hard to take seriously because their often quirky manners.   But, they do have a few deep seated issues.

They are in particular worried about being intimate with other races because as state their sacred texts “it could destroy the world.”  The more likely issue is that they are not biologically compatible with any other race and to go beyond anything more than friendship would be counterproductive to maintaining their low population.

Then there is the notion that perhaps their own is history and memories of being an alien species is some sort of biologically induced delusion.  The vast majority of Marlarkoids discount this as nothing slander and at worst boarding on hate speech.  Those that except this notion beyond just as a “what if” thought exercise, often end up becoming a cackling villain yelling “I’m evil” to explain their random acts of destruction.  They also have a tendency to monologue while recording it “for posterity.”

Description
They are a thin, gaunt race with somewhat humanoid shape.  They have foot pods and tentacle-like arms that are very prehensile. Their face has three eyes that are brightly colored that don’t blink in the human sense.  But they do have nictitating membrane to protect from dust and objects.  They have a slit of a nose and a small mouth loaded with small sharp teeth.  They have ear hoodies that clamp down, and like most of their biology that points towards being evolved to survive harsh desert environments.   As they age they sprout little cilia that are vaguely prehensile all over their green body and a long strand at the top of their head, but are otherwise hairless.  They are also highly mutable, and while some general genetic patterns do exist, one Marlarkoid might be quite different than another.
When it comes to attire, they prefer hoodies and long cloaks to hide their looks to people they don’t know.  However, a sizable population in western Canada has taken to wearing cowboy attire.

Features
·         Creature Type:  Aberration
For the purposes of creature targeting, otherwise act as a normal human for biological needs of breathing, eating, drinking, and sleeping.  They heal from luminescent and take damage from corruptive energy normally.
·         Template:  Mutate (DRev Book of Adventure)
Note all calculations from this template are accounted for the Marlarkoid.
·         Racial talent tree access: Plant*, Savage, Vision, and one of choice
*the plant talent tree can be found in the DRev Book of Arrogance.  They cannot benefit from any of the Photosynthesis talents.  When they choose a racial talent to take from, they may only benefit from talents that would make sense for them and with GM approval.
·         Ability Score Adjustments: Special; during character creation they gain +2 their highest ability score, and -2 to their lowest ability score.  This means the standard array used to build characters will look like this:  17, 14, 13, 12, 10, 8.   Malarkoids prefer high charisma or high wisdom in most cases.
·         Size:  Medium:  Medium creatures and have no bonuses or penalties due to their size.
·         Base Speed:  30 foot
·         Vision: Darkvision 60 feet
·         Languages:  Trade Tongue, and one of choice (usually based on their home location)
·         Tentacles/Vines (Ex): You have 2 extra Tentacles. These Tentacles can be used like extra arms, allowing you to have additional weapons drawn and perform actions while your normal hands are currently armed (i.e. you could attempt a grapple even though both your hand are armed as long as your Tentacles are free). These do not give you additional extra actions; they just give the option of performing different actions while other limbs are currently busy. Tentacles also do not add to your carrying capacity, ability score and do not add additional item slots (other than being able to hold weapons). You may attempt normal unarmed combat with your Tentacles, but they provide no special bonuses in doing so. You may apply your full strength modifier to attacks made by your Tentacles, and they apply primary hand penalties for the purposes of two weapon fighting.   Note:  This is the same as the vines talent and may be used for all talents that require the prerequisite of the vine talent.
·         Helium Bladder:  This is a unique Malarkoid talent and grants them the following abilities by manipulating the helium they collect within the gas bladder.  They can release gas to give themselves a +4 to one of the listed skill rolls below for a single check.  However, each subsequent use of this effect lowers the bonus by 1 point, until it grants no additional bonuses (so +4 on the first daily use, +3 to on second use, +2 on third use, +1 on the forth use).  The +4 bonus renews after the creature has had a chance to take a daily rest.
o    Floaty: They can release gas to grant them the skill bonus to Acrobatics or Athletics.
o    Break the Ice:  They can release gas to grant them the skill bonus to Diplomacy for comedic effect.
o    Embarrass:  They can release gas to grant them the skill bonus to Manipulate.
·         Free Talents:  They may pick up to 3 additional racial talents they are qualified to take.
o    Note that classically older Marlarkoids will take access to the Dream Cantrips racial tree (DRev Book of Magic) and work on getting the superior version to gain powers like Disguise Self to move in and around other species unnoticed.
·         Mutate Advantage:  Marlarkoids may use feat slots to take racial talents they are qualified to take.
·         Mutate Penalties:  Marlarkoids are at -3 to Bluff checks (no one takes them seriously), and -2 to Willpower saves (a bit over naïve).

Final note
The picture was made with the following url
http://fabricadeherois.blogspot.com.br/p/fabrica-de-herois-2009.html 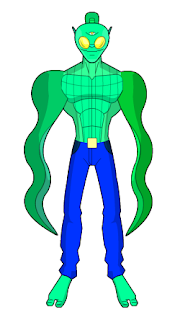 Posted by drevrpg@gmail.com at 5:16 AM