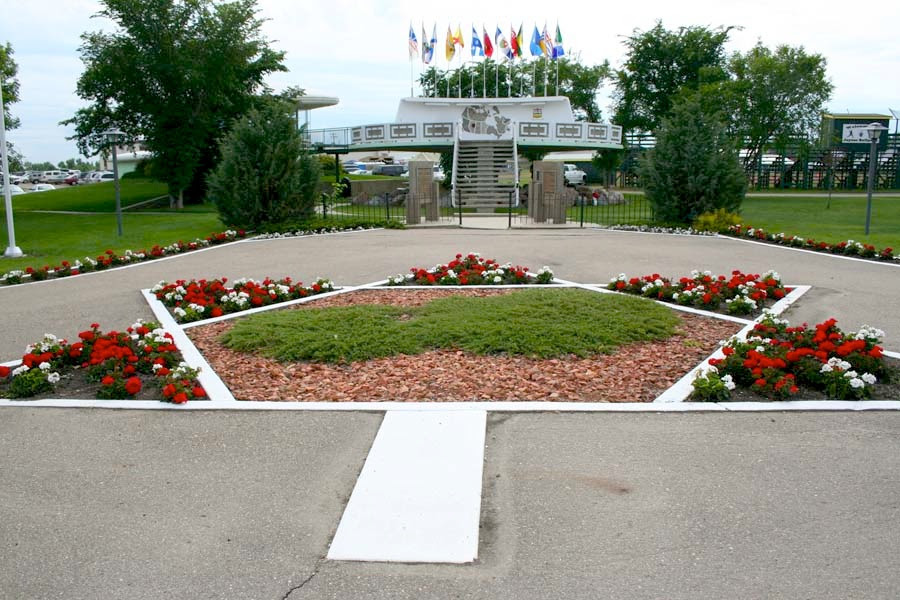 This is the first official UFO landing pad that was sanctioned and built by the ancient Canadian government of times past.  It was consummated in a massive ritual that was performed across the country in the year 1967.  It has always attracted strangess and weirdness.

This site fell into disrepair, until it was rediscovered by Harold.

Nobody is sure how long Harold has been around.  He’s claims to be a member of an ancient and mysterious secret order, but he talks little of this beyond his “ceremonial clothes” of red checkered shirt, red and green suspenders, beige pants and horned rimmed glasses.

He is a master Faustian Mechanic that has maintained the site in the hopes of meeting “aliens.”  People are still not sure what he means.  With all sort of races that have flung to post-revelations earth, you’d think he had his fill.  But still he persists.

He has attracted disciples to his passion.  The majority of his minions being little bears and serpent people, but he’s always happy to talk to “star watchers.”

Additionally, Harold has a Faustian Mechanical portable device that is an oversize patch panel on a shoulder strap with dials and a keyboard that acts as a focus for the majority of his powers.

The landing pad is inscribed with mystical symbols in the ancient languages of French and English.

It also has a several monitors showing landing footage proving that will happen again.

Place of Power: Major
Special Usage: The caster gains +2 Ritual skill checks to cast Conjuration, Divination and Illusion spells. Upon successfully casting one of these spells, you immediately know the current of year, date and current time to the second. You will also know where the stars are in the sky for the next 24 hours.  This will give a bonus of +2 to all survival checks when it comes to navigation and tracking.
Other Rules: You must be standing on the pad to gain the spellcasting bonuses (however the star knowledge lasts regardless of whether you leave or not).  You also gain the ability to gain control of the various scope lights that surround the landing pad.

The Situation: Somebody has stolen Harold’s patch panel.  Harold hires the party to get it back from a nearby Minotaur clan whom are believed responsible.
Potential Twists:
·         Harold lent them the patch panel, but absent mindedly forgot.  The party needs to play peacekeeper to avoid complications.
·         The Minotaurs stole it so Harold could not open a portal to the hallowed world on the summer solstice, letting in demons that Harold has mistakenly thought are aliens.
·         CRAZY Radio (See book of Arrogance) has possessed either the Minotaurs or Harold and they have become his dangerous devotees.
·         As a dare, one of the younger Minotaurs stole the object, but not for power, but to tie the strap on the biggest scariest Thunderslither he could find.  The party needs to track down the Thornslither and either fight it or calm it down to retrieve the patch panel.
·         Aliens did steal his patch panel.  Whether it is from the Dreamtime, Hallowed World, Outer Space or are just illegal aliens is up to you.   Naturally Harold is ecstatic and will want to join the party in discovering them.
·         Desecrators from the south stole his patch panel.  They built a faustian mechanical space ship to awe Harold before stealing his patch panel.  They because the patch panel is the key for their Armageddon machine.  The party needs to stop them at all cost.
·         The little bears and serpent people are doing an intervention because they are fond of Harold, but think his obsession is going a little too far.

Common Monsters to Use:

Desecrators (Aerodemon, Chimer, and Legionnaires), Entities (Fury), Mooks (Boomers most common, but Blasters and Bandaids would also be common), Thornslither.

#drevrpg #d20 #apocalypse #relicroadshow
Posted by drevrpg@gmail.com at 4:38 AM