Jason Says…
Coming soon (July 2015 to celebrate my birthday on July 16th) is our “Book of Arrogance, It’s all in your head.”  It’s one of the things I’m most proud of we’ve done so far.   So here’s what you will find inside.

·       The all new Psychic Class, with new rules for psychic powers that is completely different than those for standard d20 3.5 SRD/OGL, yet familiar enough to play with ease.
·       In this new Psychic Class, you will get 4 new paths.  The Eruptor, master of elemental damage and going a bit crazy when out of power.  The Mentalist, your classic mind controller that can rip minds asunder.  The Psycho-Warrior, a melee and front line psychic fighter and true weapons specialist.   And, The Rocker! Who needs magical bards? We got psychic rock and rollers.
·       Use familiar psychic power tropes like empathy, pyrokinesis or telepathy, or fire laser beams of death using Photokinesis.  Plus many new powers in organized power sets.
·       New and crazy races.  You’ll find nothing ordinary here as we let you play from level 1 as Dragons and Cats…yes intelligent house cats.   Also Minotaurs. Not as cursed creatures, but heroic hair metal rockers from a far off dimension.  Plus our own creations of the Harvesters and Stumpies.  One is a master psychic from seedling, while the other is tough and bit rough around the bark.  And, yes both are plants.
·       Woowear, equipment to enhance all those new psychic powers you have.
·       Psi-tats, get some psychic tattoos to gain additional power.
·       The Sandbox of Ed-Town.  Where rock and roll, and other psychically enhanced individuals have taken over.  Meet folks like Axle Thunderpipes, the Devilish Dangerous Dr. D. and many others. 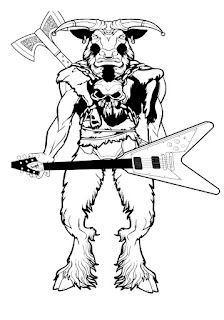 Minotaurs see the world in Black and White.
Background
Minotaurs have a clear view of their past, because it is also their future that has already happened.  At some point in the distant future Minotaurs will be the rulers of Minos, a labyrinthine dimension of stone straddling between the Real World and the Hallowed World.  And yet, it will never exist.  Minos, some ten thousand years from now, was or will be destroyed by the echo of the Revelations rippling through time-space.  Not only was the dimension destroyed, parts of it where flung to the far reaches of the universe and across time with Minotaurs in tow.
Most Minotaurs completely accept the ancient Greek tales of a man-bull creature roaming a maze, cursed by the gods, and defeated by a hero.  They even accept that the Greeks stole their name and put into their own language.  Though, the Minotaur’s version is slightly different.  It tells of a lost band member flung backwards in time on a fragment of Minos.  His sad fate can be seen in the incomplete myth told by an archaistic society that mistakenly hunted him as a monster, when in fact he was only a victim of circumstance.
Minotaur history has numerous similar paradoxes to it, known as Quistory, or quantum history.  The most stable version of recent events has Minotaurs finding their way to Hallowed World’s Asteroid Belt in the past just after the revelations (or far distant future depending on your perspective) after the destruction of their home.  There they were trapped in a horrible dark realm, their music suppressed by evil forces.  Until they were able fight their way to back to our present and their new future.
If you are confused, take the advice of that many Minotaurs give their roadies “don’t worry about, listen to some music, it’ll make everything better.”

Society
From a Minotaur’s point of view, it’s a sad fact that the myths about them have misplaced their most celebrated attribute.  Music.  Their former home Minos was filled with music.  Wars where fought not on battlefields but on stages and musical instruments were sacred relics.  Trying to recapture this lost society in a world filled with enemies and allies who are a little tone deaf has been pretty hard on your average Minotaur.
Minotaurs often form in clan-like groups they call bands.  Each band is led by a “Chief” often with a primary title based on the type of music the clan plays, so most are “Metal Chiefs” because of the Minotaur’s nearly universal love for all things hair metal.  Minotaurs do not have a centralized society as such.  Each band roams their territory making their home on the road in vans, buses, and of course on their bikes.  Bands also may “go on tour” where they raid far from their home territory for supplies.
Unlike your average motorcycle gang, Minotaur bands have the innate need to do concerts, so raiding can become surreal mix of guns and guitars being set upon a targeted town.  But, the best bands don’t even need to raid.  They can often get paid for saving a town from some bad promo they happen to come across, all the while playing their songs.

Relations
Just because they are clan-like, doesn’t mean they are insular or xenophobic.  Quite the opposite, they are friendly and nonjudgmental to anyone meet…as long as they are not haters.  Since Minotaur populations are small and spread out, they are always seeking new band members and anyone is considered for auditions.  Dwarves and Humans are often auditioned as backup members, while Half-Orc and Elves may take second lead.  Cats are one of the few creatures allowed to first lead and even occasionally chief of a band.  Dragons are relegated to stagehands, bouncers, mascots, or better yet pyrotechnicians.

Adventuring
While a significant number of Minotaurs roam around the Great Lakes, they can be found almost everywhere, even parts of the Hallowed World.  The largest gathering of Minotaurs is in Ed-Town where music dominates the landscape.  Minotaurs from far and wide travel to this city for a chance to recapture some of the glory of days long past and to forget about their problems.   For Minotaurs there is one equation in life that truly makes sense:

Recommended Class/Path
Minotaurs claim to be the founders the fine art of rock, so being Psychic/Rockers is a sure thing.  Many Minotaurs become Combatant/Brutes to serve as bouncers for the Band.

Personality
Did we mention Minotaurs like music?  They fulfill the varied lives of rock stars, with complete conscious decision of what they are.  They can be hard ass warrior poets, live fast-die hard burnouts, or introspective musicians looking for a muse. The only no go zone for Minotaurs is becoming snobbish pampered celebrities.  It fine to be confident in your skills and loved by fans, even earning some cash is good.  But to act like a jerk to your fans is just a no promo.

Description
Most Minotaurs could best be described as hulking.   While mostly humanoid, they are known for having a bovine features, with the most well-known one being their head, complete with horns.  However other features include a cow-like tail and cloven hooves.  A light hair covers their entire body and comes in the full range of colors that you would expect from cattle and other bovines, with the most common being browns and reds.  This often grows into manes along the head and neck.  Their appearance is usually enhanced by furs, trophies and sharpening of the horns.  They are also big on tattoos.  Though these tats are more like branding than what a human would think of as tattooing.  That leaves one thing missing, the hair.  While their manes can be quite long, they will never reach the lengths required for head banging.  Thus, many Minotaurs have taken to wearing wigs for this purpose.
Height:  5’5” +5d6 inches
Weight:  150 lbs., +Height Mod x5 in lbs.
Age:  Starting 12 +1d6 years (+1d4 years for spell casters).  Middle Age:  40 years; Old: 80 years; Venerable: 100 years; Max Age 120 years +2d10 years.

·         Creature Type:  Monstrous Humanoid (for the purposes of targeting).
·         Template: They may take templates
·         Racial talent tree access: Growth, Savage and Stout (DRev Player’s Guide)
·         Ability Score Adjustments: Strength +2
·         Languages:  Trade Tongue and one of choice
·         Vision: Darkvision 60 feet
·         Base land speed: 30 feet
·         Size:  Medium
·         Horns (Ex): 1d6 (piercing), 20/x2, natural weapons (See DRev Player’s Guide Racial talents for rules).
·         Minotaur Heritage:  Gain a total of one additional racial talent from the Growth, Savage or Stout racial talent trees they are qualified to take.
·         Ballad of Skill (Su):  All Minotaurs gain the Rocker’s Ballad of Skill talent as a free talent they may use within the rules of that power even if they are not Rockers.  If the Minotaur becomes a Rocker they do not have to take this talent again and may use it for all class prerequisites.
·         Minotaur Navigation (Ex): You gain a +2 bonus to any skill check (typically Survival or Use Vehicle) to avoid getting lost or finding your way around.  You may also apply this bonus to saves against powers or attacks that dimensional shift or teleport you against your will (including escaping from the Maze spell).
·         Limit, Non-human parts:  Minotaurs cannot wear head slot, eye slot or boot slot items unless designed for them.  This doubles the normal base price of it, if it is a mundane item. \

Posted by drevrpg@gmail.com at 3:00 AM