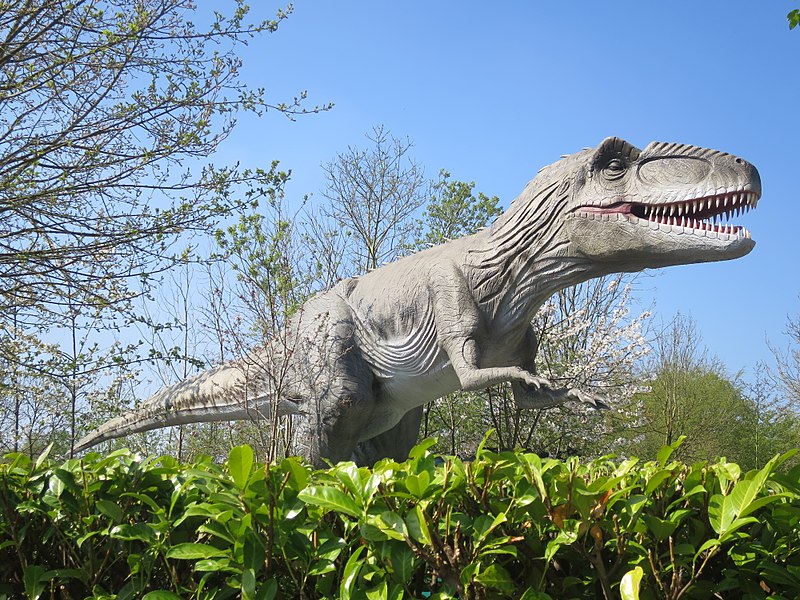 While there are still native species and creatures, this is the continent of the dinosaurs.

What you need to know:

1. Bird-like:  Dinosaurs are related from birds and their physiology reflects this.  They are warm blooded and lay eggs.

2. Brain Size:  Dinosaurs may have smaller brains then primates, but there is a higher degree of grey matter, not unlike a crow or parrot.  This gives them a range of intelligence from a house cat to chimpanzee level.  If magic is involved, they can range from human intelligence and beyond.

3. Communal:  While there are solitary species, most dinosaurs are social creatures.  They communicate using gestures that could even be considered “dancing”, scents and even “singing” often at a range that outside of human range.  This makes them very dangerous as they are able to use elementary tactics in both hunting and defence.  It also makes many species able to be domesticated once you figure out how to communicate and fulfil the niches of cattle, mount, heavy labour, companions and pets.

4. Feathers:  Most Dinosaurs have feathers of some sort and is used to differentiate between dinosaurs and other prehistoric creatures.  The smaller species, especially raptors, are covered from head to toe.  The larger species have a “feather ridge” that is around the neckline.  Instead of preening, Dinosaurs moult in the spring growing a new layer of feathers underneath.  Male Dinosaurs are more colourful then Female Dinosaurs.

Pick or roll the following table to determine colour patterns 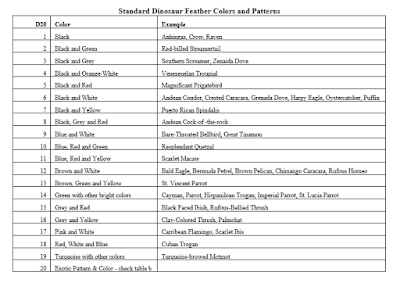 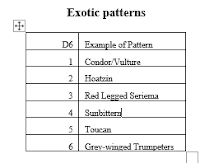 5. The Taint:  The Dinosaurs that live in South America were originally from the Hallowed World.  While mostly no different than any other animal, this has made them susceptible to supernatural influence.  While too numerous to be considered evil, there is always a fear when a dinosaur gets too smart that it is being possessed by something far more nefarious.

6. Temperamental:  Even friendly dinosaurs are temperamental by nature and combined with their massive size and strength can do terrible damage quickly.  It gets worse with “wild” dinosaur species that will have a tendency to hunt any available prey without any forms of regret.

7. Magneto-Reception:  Since most dinosaurs are originally from the Hallowed world, they evolved a form of navigating by tracking the world’s magnetic field.  This allows dinosaurs to not have to rely on its other senses when the weather is bad.  This is often used when using them as mounts to make great time. 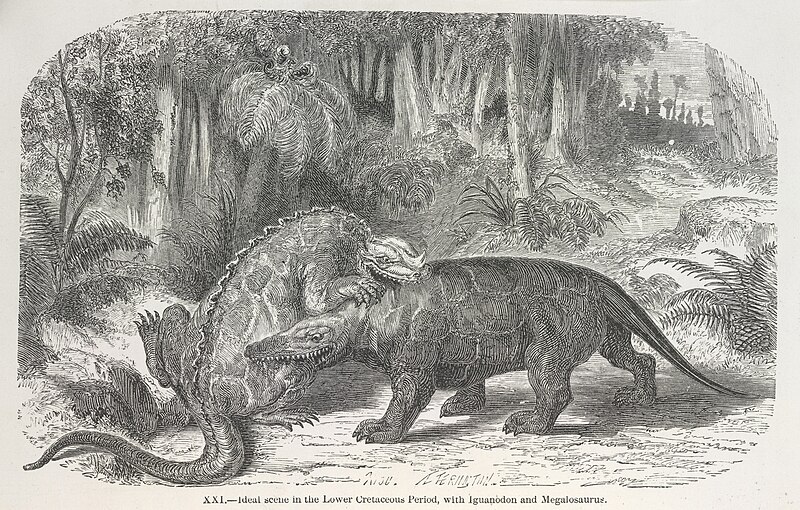 The people of South America have been living with dinosaurs for hundreds of years and have developed many techniques to surviving with them:
1. Stink bombs often mess up the senses of dinosaurs giving a temporary window to do something.
2. Loud noises against dinosaurs are also a great way to stop one charging, but need to be used sparingly to avoid a stampede.
3. Most houses are either built with the idea that by putting them on a raised platform, they will avoid the majority of conflicts with the mostly ground based dinosaurs.
4. This is also why many villages, towns and even cities end up with large defensive walls made of sharpened wood, mud bricks or stone depending on location.  Some are built with multiple layers to create “kill zones” as necessary.